5 years ago, at the end of the year 2011, a strong curiosity aroused in my mind. “I have heard a boy named ‘Buddha Boy’. So many years have passed now, then where is he now?” I could not help but feel a strong impulse to know about him.

Since that time, I had desperately found every possible way at some Korean portal sites, but failed. There was no information about him at all. I could not get the news of “Buddha Boy” in Korean language. Several days later, suddenly I had an idea! “Ah ! I should find him on Google. Because he must be worldwide famous.” And finally I have found the official homepage of Guru.

When I first saw the image of Dharma Sangha Guru, I was totally overwhelmed by the presence of Guru. A first glance of Guru’s image guided me into a big “samadhi” state. Usually my whole everyday life had been focused on the meditation for over 20 years. So, experiencing 2 or 3 hours of samadhi with much effort was not difficult for me at that time.

But that samadhi was totally different from usual. There was no effort. The samadhi appeared out of nowhere. My ego suddenly dissolved into infinite consciousness. There was only boundless happiness. That state had continued 24 hours a day over 30 days. There had been no one who had been such a great influence on me like Him. So I felt a strong desire that I should meet Guru.

At age 11, I read the biography of Sakyamuni Buddha. I was shocked because there had been no one in my 11 years of life who was unselfish and dedicated his own life for the whole suffering beings. Everyone, even my parents and school teachers urged me to become aggressive and selfish. I did not agree with their opinion. I was in a trouble between my ideal and reality because I was mere a child.

In the mean time, I have read that book. I was deeply moved by his story. I had wept nearly 4 days. I could not stop crying. He was the only existence having no ego and great sympathy. So I have set my life-long goal to be a Buddha like him. But in a real life, everybody struggles with each other. There was no Guru who would be my role model.

From age 19, I seriously started meditation. When I had spare time, I always went deep into the mountain side and meditated. If there was no money then I came back to the city to earn money and prepared for my next retreat. I have tried my whole life for spiritual growth.

At my age 45, I finally have found my Guru. He was Dharma Sangha.

I met Guru for the first time at the Halkhoria World Peace Maitri Puja in March 2012. Again I could not stop crying. I felt my ego melting down. There was only infinite compassion throughout the whole Halkhoria jungle area. At the same time, I was shocked. After 30 year’s my effort was only a dust, just a droplet. But Guru’s presence was a limitless ocean.

For the whole puja, I always wept. At last I have found my perpetual Guru. I was greatly relieved by that. When Guru blessed me, just one touch of Guru transformed me totally.
With the soft touch of Guru on my head, I felt the infinite Maitri Love of Guru to whole beings. My heart and head were wide open by Guru’s blessing. My soul was renewed, I bowed and again I burst into tears. I have totally surrendered under the feet of Guru. Nothing could be compared to Guru’s blessing power. I got a glimpse of the Ultimate Enlightenment. I vowed myself.

“I don’t know how I can return the Grace of Guru. From now on, I will follow the teachings of Guru Dharma Sangha. That is the only way I can do.”

I have met Guru four times since 2012. (World Peace Maitri Puja in March 2012, Chitwan Puja in June 2013, Lamjung Puja in Feb. 2014, Sindhupalchock Maitri Divas 2016). From that time, I have tried hard on my meditation under the presence of Guru. There have been so many teachings from Guru, sometimes during meditation, sometimes in my dream, sometimes in my daily routine. When the circumstances permit, I will share other experiences to you again. 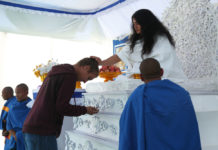