Roast beef and sashimi were by far my favourite foods throughout my adult life, especially the latter which had become my staple daily diet in Japan, especially during what seemed an overextended pregnancy.

When forty-some years later Guru called meat-eating “monstrous behaviour” I was at first taken aback, having been a good girl all my life, dutifully eating up all that was on my plate, meat and all, now to be called monstrous. Then I thought what Mother Pig or Mammie Goat or Moo Cow would tell their young, “Don’t roam too far from home, baby, and look out for dangerous animals, especially the two-legged kind. They will pretend to pet you, but they will cage you in, fatten you up and lock you in the stanchion. They only want to eat you. They have special places for killing us by the hundreds in a day. They will cut up and freeze our body parts, ship our dismembered frozen bits around the planet to eat roasted, cutlets, baked, boiled, stewed, or skewered….”

I realised then that these Mums might well have told their piglets, kids or calves, “Above all, watch out for those two-faced, two-legged monsters.” Envisioning those large, all-too human eyes, I was able to stop eating all meat cold turkey (Ooops).

But sashimi posed a different problem. After all, fish don’t know their parents or their children. No one will miss them. I always thank them for offering their body for our nourishment as surely as I shall be offering up mine for theirs one day… I thought… and fish being cold blooded, aren’t they nearly vegetable? I thought. Hopefully.

That night I saw in my sleep a beautiful carp upright, struggling in the grip of a large fist as a sharp knife flashed straight down its front, opening its guts. I saw its startled eyes roll as it gasped in shock, opening wide its glistening mouth. “Why?” Clearly, eating this beautiful living being, too, is monstrous. There could be no more doubt, even in this gluttonous heart. And so after some seventy-eight years of being the traditional good girl, uplifted by a swelling, overflowing empathy for fellow creatures that then took off in new ways, my carnivorous days came to a quiet end.

Far more dramatic is the story of M the young Songstress in western China who wrote, “After watching Guru’s videos with my tears flowing full stream, His influence on me has been immense. Now I am totally vegetarian, and easily stopped smoking and drinking when in the past no matter how I tried I could not give up alcohol and cigarettes. I have been completely renewed by Guru and, under His guidance, have become good, and the true meaning of my existence is becoming increasingly clear to me.” 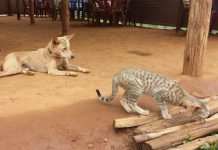 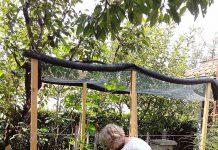 “Harmony” Garden and The World of Maitri